Leighton gearing up for Seagulls tenure From the coastal town of Portland to the coastal city of Melbourne, Chloe Leighton is set to relish her Williamstown journey as the club’s first new VFLW signing this off-season.

The 20-year-old has showcased flashes of potential and maturity in her stays with both Collingwood and Carlton and the Gulls hope this can be further developed with an already existing young core.

Leighton grew up in Portland with four siblings - one older, three younger. All of them showed a passion for footy at a young age.

As she grew older, and with women’s footy still in its early stages of development, Leighton would often have had to travel hours at a time to find opportunities around the greater Ballarat area.

Long-touted as one of Portland’s most promising women footballers, Leighton persisted to be a part of the Greater Western Victoria Rebels prior to her move to Collingwood’s VFLW team in 2018.

Before the up and coming draft Leighton travelled to America, but not for a holiday, it was all business.

Leighton was one of only a few selected women to travel to a training camp in California to further improve skill and conditioning. She obtained further skills with AFLW drafted players from all over the country and she was only 18.

“It was good to see the standard at the American Nationals… that was a stepping stone to get to know people in the footy world,” Leighton recalled.

It was Collingwood that would sign Leighton in late 2017, which is where she first met and developed her relationship with coach Penny Cula-Reid.

“I met Chloe at Collingwood in her first season,” Cula-Reid said.

“She’s a great kid Chloe, she's your good old country girl. Knows how to work hard, really wants to aspire to be that next level player.”

The two formed a tight bond, especially whilst Chloe was adjusting to being so far from home and her family.

“We created a close bond and I’m enjoying being coached by her again,” Leighton said.

After 10 games with the Pies in their minor premiership-winning 2018 season, Leighton crossed to the Blues and booted two goals from a further seven matches in 2019.

But it’s at Williamstown in 2020 where her eyes are firmly set.

The skilful forward is currently enjoying her first pre-season at the Seagulls and said she is focussed primarily on improving her speed and conditioning.

With 17 games of VFLW experience under her belt, Leighton is now ready to flourish as a midfielder/forward in her newest football environment. 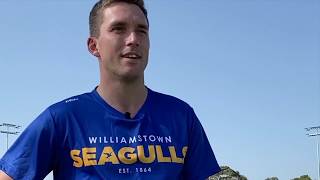 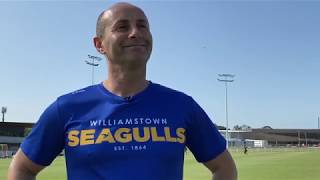